Rain falling on chicken wire covered trees reminds me of Christmas lights strung along each branch down the boulevard.

To say it has been a while is an understatement. I stopped writing for the public sometime in October. Life sometimes moves in a way where I learn I only have the energy to keep up with myself. Since last autumn, I ended up driving through Mexico to learn Spanish, explore, and climb Mayan ruins; soon after, I impulsively bought a ticket to the east coast and stayed in Pennsylvania, New York, New Jersey. I also fell in love.

Here’s a poem I wrote at one o’clock in the morning. The anonymous prompt is great: “ennui… and maybe I like it that way” 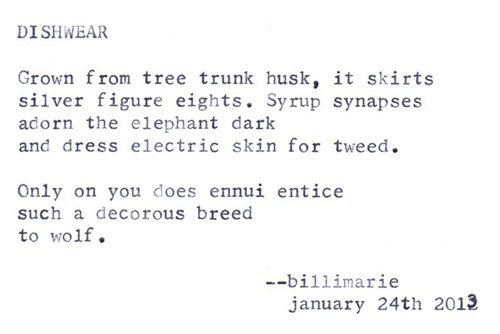 Only on you does ennui entice
such a decorous breed
to wolf.

i love the use of language, or miss use, or less misuse and more imaginative , i think we hold ourselves to some type of weird language ideal when in fact it was all mde up in the first place! i love your poem it is absolutely beautiful it sings to my dark bark and penetrates

The poem is wonderful, Billimarie! And congratulations on your time away – it sounds like it was really worthwhile – a great adventure.

Welcome back to the strange and wonderful world of blogging Billimarie. You have been far and experienced much but nothing trumps falling in love. Your poem touches deep…

Great to see you back. Like Arna, I really appreciate the use of language – and especially the way you do it – no room for insecurities with your talent!

just because language has been recorded to a dictionary does not mean it is confined, as you have done so well – it constantly escapes and is unbound

Handmade Postcard: “Beneath the Winter lies the Waiting”

In December 2019, I handmade postcards and letters then mailed them to different friends and family. I plan on doing another snail mail round at the end of January. If you'd like to receive one, you can send me your address through email.

Found out my friend Ryan passed away last year. We met at the Canoga Park Art Walk a few years back...I typed him a poem, he showed me his drawings. Young guy. Potential. We stayed in touch, hanging out and talking, reflecting. The last time we talked, he told me he was focusing on recovery.